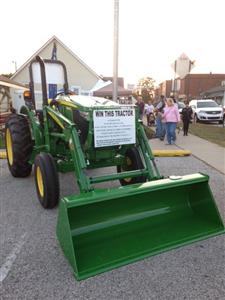 In 1990, we decided to bring something new to the festival. We decided to give away a John Deere tractor during the festival. We buy a brand new John Deere tractor each year. It is usually around a 45 hp tractor with loader. This was a huge hit and continues to be. There are only 450 tickets sold. They are $100 each. We also give away $3,500 in cash prizes during the drawing. If you do not want to take the tractor there is a $14,000 cash option you can take. We draw out every ticket. The very first ticket drawn wins $500. Then every 25th ticket drawn after that either wins $100 or $200. The 449th ticket wins $500 and the 450th ticket drawn is the winner of the tractor! This process usually takes around 3 hours to determine all the winners. This is held during the festival and always has a big crowd as the drawing is going on. If you would like to buy a ticket, or be put on the list to buy one for the following year, give Karen Wagner a call at (317) 696-7445. This is one of the festivals biggest fundraisers we put on.

COVID-19 UPDATE:  Unfortunately, due to the current Pandemic, we have cancelled the 2020 Monrovia Festival.  However, the tractor drawing was still held on September 12, 2020 at 3:00pm!  The winner of the tractor was Neal Beams!!!!!  Congratulations, Neal!!!

Our next tractor raffle will be held during the 2021 Festival on Saturday, September 11th.  Tickets will be available July 2021!  If you purchased tickets last year, you will get a call, text or email letting you know your tickets are available for you to purchase again.  Any remaining tickets will go on sale after previous purchasers have been notified.  There is always the chance tickets and the drawing for ticket #450!